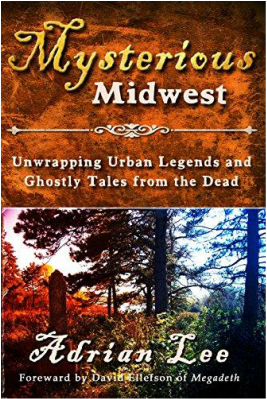 Are you ready to experience Fairlawn's resident spirits, Loon Lake Cemetery's witches curse, the phantom of the Wieting Opera House, the restless souls of a Masonic temple, and the ghosts of grisly murder victims? Join ghost hunter and historian Adrian Lee with his elite team of paranormal investigators on a compelling tour of the Midwest’s most haunted historical sites. His chilling first hand investigations accompanied by rich historical details will send shivers down your spine as he recovers history from the lips of the dead.

With a foreword written by David Ellefson of multi-platinum selling and award winning band Megadeth whose own experience of Loon Lake Cemetery in Jackson County inspired him to write the single Mary Jane on the album So Far, So Good…So What!

Mysterious Midwest contains eighteen historical haunted sites ranging from a pioneer cemetery, a masonic temple, gothic mansion houses, disused schools, theaters and even a cargo freighter on Lake Superior. Previously uninvestigated these locations allowed Adrian Lee to retrieve history lost to the knowledge of man in towns and cities all over the Midwest. Read about his interaction with ghost children, phantom heads, First World War soldiers, lost spirits, murder victims, and the earliest pioneers. Unwrapping the sometimes shocking truth behind the urban legends of hangings, ritual sacrifices, devastating fires, drownings, and murders. With a wealth of paranormal evidence and photographs of many of the ghosts and spirits found at each location. This is the pinnacle of historical research and paranormal investigating combined at the highest level.